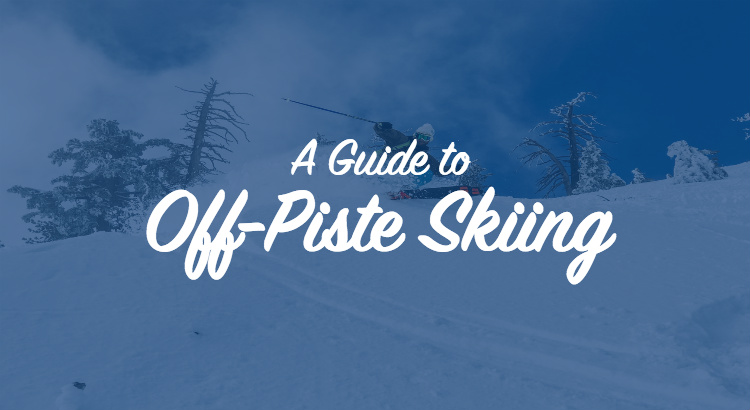 Powder skiing. Backcountry skiing. Whatever you call it, off-piste skiing is the official term for taking your adventures off the beaten track.

“Piste” is actually the French word for “track”. Because skiers can either be on-piste or off-piste, skiing where the groomed, combed resort runs go, or taking your skiing adventures into the untamed wilderness.

There are plenty of reasons to pick up the sport of off-piste skiing. And it’s more than just skiing where no else has gone. It’s not just about getting first tracks onto a deep powdery run. It’s about conquering nature and having the freedom to ski where you want.

There are dangers, sure. We’re not going to suggest that off-piste skiing is for everyone. But because it’s gained some traction recently, we thought we would cover how to off-piste ski. It’s a subject near and dear to our hearts, and we would love to introduce you to the sport that has captured us so thoroughly.

You should know there are several ways to enjoy the snow this winter. You can find great laid-out and designated runs in ski resorts all around the world. They are well groomed, perfectly prepared, with convenient chairlifts and pull ropes to take you to the top.

You could find flat ground and do some cross-country skiing. Besides being a great workout, it’s a fantastic way to get out of the city and enjoy nature with some peace and quiet.

You could even do some advanced skiing like telemarking, a unique style that we haven’t yet fully grasped. It’s a downhill skiing method that actually combines the cross-country and downhill formats.

But if you’ve seen the fresh powder, you’ve envied the freedom of those first-time track makers through untouched snow. You’ve wanted to find a way in to this sport…

…and we’re here to help you. We’ve laid out the basics of everything you need to know about off-piste skiing.

This article isn’t everything that there is to know about off-piste skiing. This is exactly what you’ll need to get a taste, an introduction, and a foothold into the sport.

We’re just going to be your off-piste ski “wingman”, if that makes sense. In this article, we’ll make the introductions to skiing off-piste and let you know some techniques, things to bear in mind and offer some other pointers. 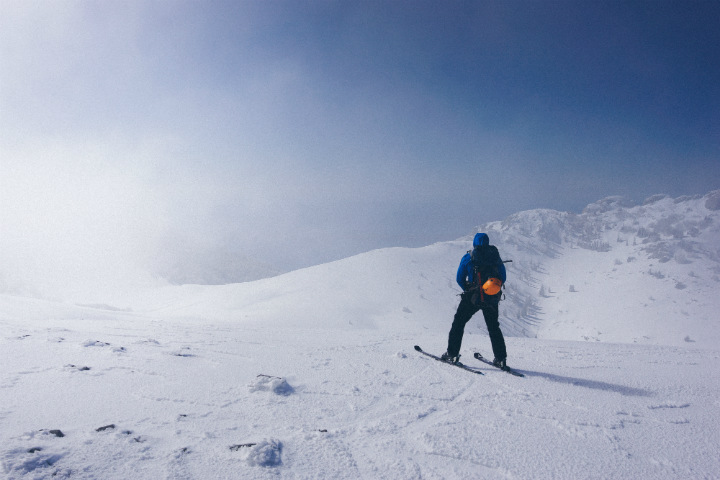 It’s up to you to chase this activity for all it’s worth. Believe us, once you get your first taste of the fresh, trackless powder down a pristine slope on a blue-sky day, you’ll thank us for taking the time to get you acquainted.

What is Off-Piste Skiing?

So we now know that skiing off-piste, in one sentence, is skiing somewhere that isn’t a specifically laid out ski slope or cross-country track.

And of course, we could sell you on the idea of skiing in ungroomed places, exploring untouched country, being at one with nature…

But everyone has their own reasons for deciding to ski off-piste rather than sticking to the well maintained resort slopes.

The question is this: What is off-piste skiing to you?

Is it the challenge? Some advanced skiers relish the chance to test themselves against something a little wilder. Resort runs can be fun, but they’re (mostly) safe and (usually) don’t pose any new challenges to the experienced skier.

The challenge of testing your skills against unclaimed runs is a major draw for some thrill-seekers. If you need your adrenaline fix, this is certainly the sport for you. 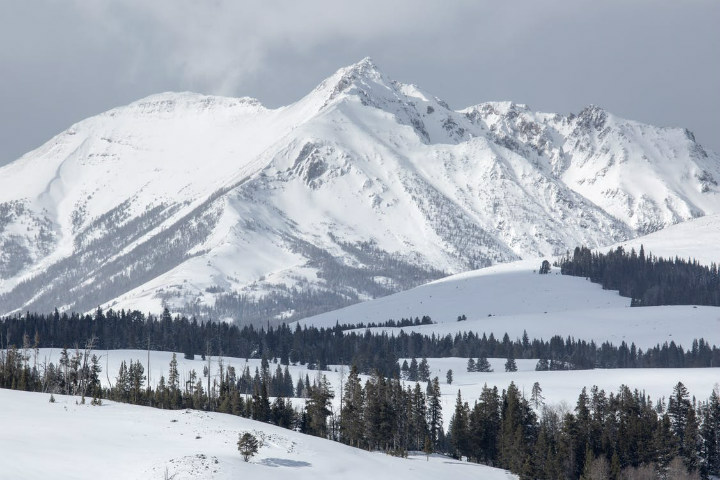 Maybe off-piste skiing is more about nature. You’ll get to see sights no one else sees. Experience nature the way it was intended to be seen. New perspectives every time you take on a new run. Instagram a few pics of your surroundings and you’re almost certain to be the only skier with that unique shot. (Think of the Likes…)

Or maybe it’s just about the crowds. Because let’s face it, sometimes the resorts can get overrun with people. Let you face beginners and wannabe-skiers on every slope. Unfortunately, you can’t open up when you have a young family taking kids down the run. And you can’t aways enjoy the freedom of speeding along when you need to watch out for other riders all the way down.

If fighting against the other skiers really hampers your style, off-piste might be the skiing method for you.

Whatever the reason (and we identify with all of them), let’s start to dive deep into the world of backcountry skiing. It could just be a perfect fit.

How to Transition from On-Piste to Off-Piste Skiing

Like most skiers, you’ve been groomed (excuse the pun) to ski on the resort runs. This is called on-piste. It’s the experience of skiing that most people know.

But how do you move away from this style of skiing you love into an unfamiliar style and technique? Because even the most advanced skiers will face a steep learning curve when trialling on this off-track technique.

Preparing for your First Run

If this is the season you’re finally going to try it, let’s take the time to prepare before you jump in headfirst.

1: Start to become comfortable with speed.

Off-piste skiing techniques usually involves taking on deeper powder than you’ve tried before. Your skis need speed to float on the surface of the powder. Otherwise, you’re stuck fighting it, slowing down and getting more frustrated than exhilarated. Allow your skis to pick up speed, much like an aeroplane needs speed to achieve lift.

So, when you’re on your next run down the resort, take a tempo that is touch faster than you’re used to. You must be comfortable with faster rates, quicker reaction times, and control during those speeds to ski off-piste.

Your experience in off-piste skiing techniques will be dramatically better if you’ve worked on keeping your skiing posture aligned. Skiing on the top of fresh powder requires a different stance than you’ve used in the past. Take the chance to do a few runs with this new posture to get used to your new off-piste skiing method.

Imagine a heavyweight boxer as they start to come to their opponent in the ring. Their weight is forward, they’re leaning in and they resting on the balls of their feet for quick movements. This is how you should stand when off-piste skiing. If you get tempted to lean back on your heels, you’ll end up like the boxer that isn’t ready; flat on your back. 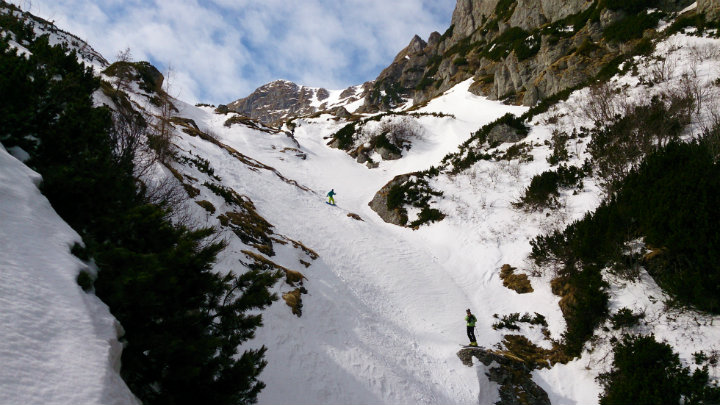 There are new rules you need to know before heading out for an off-piste pass. Follow these precautions to keep yourself safe out there.

This is not a solitary sport. It’s too dangerous to try skiing in deep powder, unsupervised without safeguards and resort staff around to provide support. You should always ski with a buddy who has some experience with skiing off-piste before. You can look out for each other as you ski down, ready to jump in at the first sign of trouble.

2: Tell others about your plans and schedule.

Part of safeguarding yourself should be that you tell other people about your plans. You need to keep communication open with people who aren’t with you, so they know where you are, when you’ll return, and who you’re with.

The only risk you ever face when heading out to a on-piste or resort session without checking reports is that your favourite run might be closed.

The real risk in off-piste skiing is that you’re in dangerous territory, as in avalanches. They are the number one reason that off-piste skiers get into trouble.

Check out the Ski School video below for more information about the importance of avalanche reports.

There are excellent reports and maps available from locals, experienced skiers, or the local park services. Get to know the five levels of avalanche danger, because they could change from hour to hour if you’re not ready for it.

4: Use the right equipment.

​Equipment is key to skiing off-piste. Like any extreme, or potentially dangerous sport, you want to be able to rely on your equipment and ensure that you have the correct equipment to call upon in an emergency situation.

This is so important, we’ve dedicated an entire post to off-piste skiing equipment. Be sure to check it out!

How to Ski Off-Piste

Now that you’ve put some preparation and forethought into your first time off-piste, let’s take a look at the off-piste skiing techniques you should master to get the best run when in the backcountry.

Just know this before heading out for your first experience:

It will take time to learn.

This is not an easy sport to master and you could need just a few hours, or maybe a few days, even several weeks to get it right. Your body is used to skiing on groomed runs, and retraining your brain could take a while for you to get used it. But as long as you go in with that knowledge, you’ll grasp it quickly and easily.

Take the time to relax. As frustrating as it can be to learn a new sport for the first time, relax! Have fun, breathe in the crisp air, enjoy the sights!

Because the more relaxed you are, the better your experience will be for learning this new technique.

Lastly, off-piste skiing does require concentration. If you’ve been skiing for several years, you’ve probably got to the point where you no longer use the same amount of concentration to ski. It’s almost second nature.

When you ski off-piste, at least at first, is not like that. One loss of concentration could put you face first into the nearest snow bank. You need to focus on several things at once and it requires deeper concentration than you’re used to. 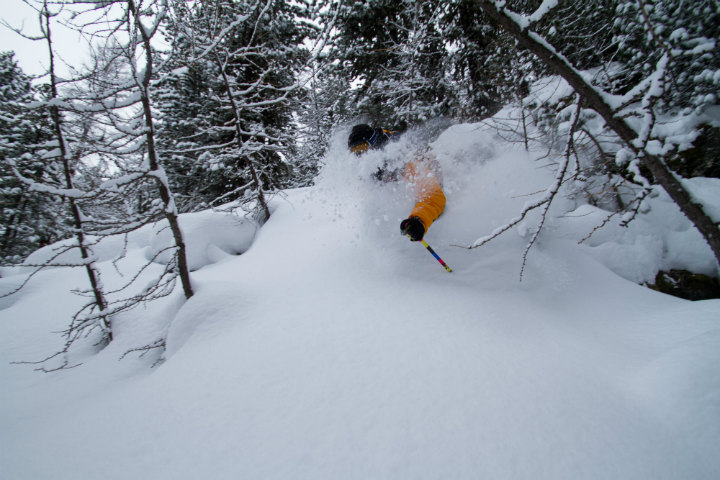 If you’re just trialling this out, let us make a quick suggestion:

Take your first few runs just off the beaten track of a resort. If you ever get in trouble, it’s always good to know that you’re just a couple turns away from a safer, groomed track.

Take longer turns. You don’t have the same control as you would in downhill skiing. You will be going faster, but you can still control yourself using longer, wider turns down the slope.

As you’re turning, your legs should be bouncing you up and down. Yes, you will be sore. Yes, this will be harder than on-piste skiing. As you’re making your turns, you should be squatting so low that your head is at the same level as your hands.

Imagine that you’re bouncing on a trampoline (which is a pretty accurate description of how it feels when you’re doing it right) as you turn. As you start your turn, reach forward to plant your poles then bounce up as you turn. It’s good to think about it as a trampoline because getting that bouncing rhythm is crucial to a good run.

Never stand upright. If you’ve ever seen off-piste skiers, they usually look like they’re almost sitting down as they head down the slope. Not only will your thighs burn, you will probably end up losing your balance as you ski.

Above all, try to enjoy it. Your first run will probably end up steeper than you would like, but the deep powder will slow you down and keep your speed in check.

And lastly, you should always look out for deep powder. Waist deep is best for a great off-piste experience, in our opinion.

Remember to have fun, but be safe. Happy trails!