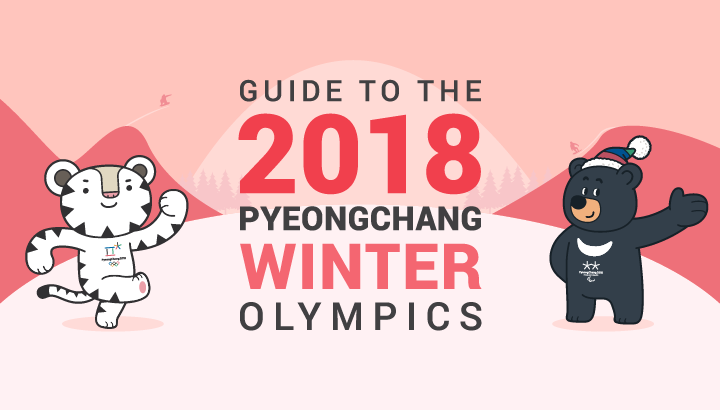 It’s that time once again, the Winter Olympics! The Winter Olympic Games is a great event that showcases the best sports and competitors in a wide range of winter sports.

Since 1924 the Winter Olympics have been staged every four years and the next games are just around the corner.

This year’s competition will be the 23rd Winter Olympics and with over 90 nations competing and over million expected spectators at the events, it’s expected to be one of the best games in recent history.

The games will be staged in PyeongChang, in South Korea. This will be only the third time that the Winter Olympics will take place in Asia, with the other two times both being in Japan in 1972 and 1998.

Events at the Winter Olympics

There will be an impressive 102 events taking place in 15 disciplines across 7 different sports:

There will also be 6 new medaled events for 2018

There are two main hubs, referred to as ‘clusters’ where the events will takes place

A virtual prediction from gracenote.com have Germany at the top of their expected medal table, with Norway and Canada taking 2nd and 3rd place:

Other medal table predictions have slightly different standings but most people seem to agree that the German team will take top spot.

As with any major sporting event, there have been some issue for the organisers to overcome in the build up to the event. There are three main controversies surrounding the 2018 Winter Olympics:

Following an investigation that revealed that Russian athletes had been involved in state-sponsored doping for the 2014 games which were held in Sochi, Russia, the IOC (International Olympic Committee) banned Russia from taking part in the 2018 Winter Olympics.

2: No NHL Players in the Ice Hockey Events

A schedule clash with the NHL (National Hockey League) and the Winter Olympics led to a dispute over whether the IOC would cover the costs incurred by the NHL players who would participate in the games, as they had done in previous games. The IOC decided against this and as a result the NHL announced that no NHL players will be playing in the Ice Hockey at the 2018 Winter Olympics.

In the build up to the games less tickets have been sold than expected. This has been linked to the recent weapons tests conducted by North Korea. The organising committee of the games eased fears by stating that it is expected that North Korea won’t interfere with the games due to the fact they will have their own athletes competing.

For more useful guide, tips and articles, check out the rest of our blog.